Today the Greens joined thousands of students, parents, staff and friends of TAFE in Melbourne to rally against state government budget cuts to TAFE. Senator Lee Rhiannon put a motion to the Senate calling on the federal government to better protect TAFE (see below). She also asked a question of the Federal Skills Minister Chris Evans.

In 2009 the Victorian government privatised vocational education and training, making it possible for private for-profit training providers to compete with TAFE to receive government funding to deliver courses.

At that time TAFE enjoyed about 75% of the training market share. As hundreds of new private training providers entered the market, TAFE’s market share fell to only 48% by 2011. In 2012 private providers overtook TAFE for the first time.

There has been a 310% growth in enrolments in private Registered Training Organisations (RTOs), and many people are questioning the quality of the qualifications they have gained. See ABC 7:30 Report

Victorian TAFEs have gone from healthy financial positions in 2008 to operating deficits today. There have been ongoing job cuts for teachers and staff, along with a drop in the number of courses on offer.

Students are expected to pay much more to gain a qualification. Enrolment fees for diploma and advanced diploma courses have risen from $877 to $2,500 per year, and apprenticeship fees have risen by 40 per cent. Students who want to retrain are being forced to pay full fees of up to $20,000 per qualification.

What’s happening to TAFE in other states?

We’ve already seen the failures of full contestability of courses in Victoria, and in New Zealand. Now the problem is set to repeat itself.

The same model that failed in Victoria is being adopted in other states. Queensland and South Australia have already agreed to it, and New South Wales, Western Australia and Tasmania are considering it. Not only does this threaten the future viability of the public TAFE system, it is bad news for the economy as it is unlikely to deliver the skilled workforce mix that Australia needs.

We must learn the lessons from the Victorian experience and make a renewed commitment to uphold a quality, affordable public TAFE system. 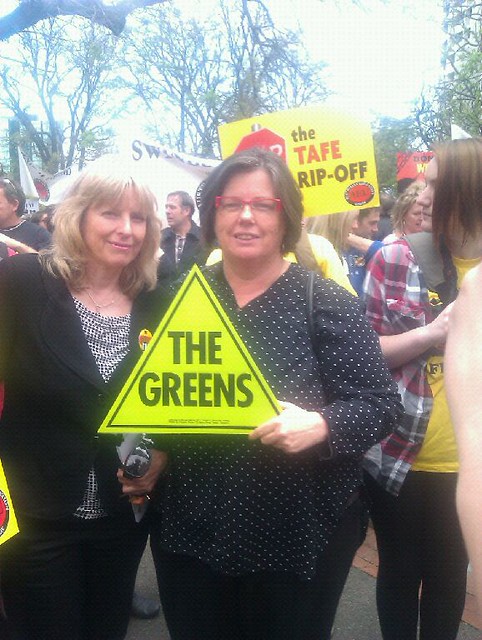 What are the Greens doing?

Australia's economic future depends on a well resourced public TAFE system. It is poor public policy to shift the cost of vocational education and training from governments and businesses onto individual students.

The Greens are committed to a well funded, publicly owned TAFE system as the dominant provider of vocational education and training. It would be a wise investment to provide further education to the next generation of Australians and meet our future national skills requirements. The Greens call on the Government to prioritise federal funding for the public TAFE system to secure its place as the engine room of national skills training.

Senator Rhiannon’s motion in the Senate to support the TAFE Day of Action:

I give notice that on the next sitting day I will move:
That the Senate—
1) Notes that:
a) On 20 September 2012 thousands of students, parents, teachers, staff and friends of TAFE rallied in Victoria, and in other states, to support TAFE students and staff who are bearing the brunt of state government budget cuts such as the Baillieu Government's devastating $300 million TAFE cuts, which will lead to campus closures, job losses, more course cuts, further increases to students fees and charges, and will damage the economy.
b) The Baillieu government’s $300 million VET budget cuts result from a drastic shift in VET market share, where private VET courses have overtaken TAFE courses for the first time, coupled with a 310% growth in enrolments in private Registered Training Organisations (RTOs), a failure of state and federal VET policy that TAFE should not be punished for.
c) The NSW government last week delivered a $1.7 billion education budget cut that includes 800 job losses at TAFE NSW and will result in a 9.5 per cent increase in TAFE NSW course fees.
d) The market-based student-entitlement model that is failing in Victoria and being adopted in other states poses a risk to the viability of the TAFE system and to the economy as it is unlikely to deliver the skilled workforce mix that Australia needs.
2) Calls on the government to:
a) Urgently introduce measures to curtail the growth in enrolments in private VET providers and RTOs which is draining state government VET budgets; and
b) Revise the National Partnership Agreement to phase out entitlement-based funding and fee help, and instead focus on funding and developing public providers.