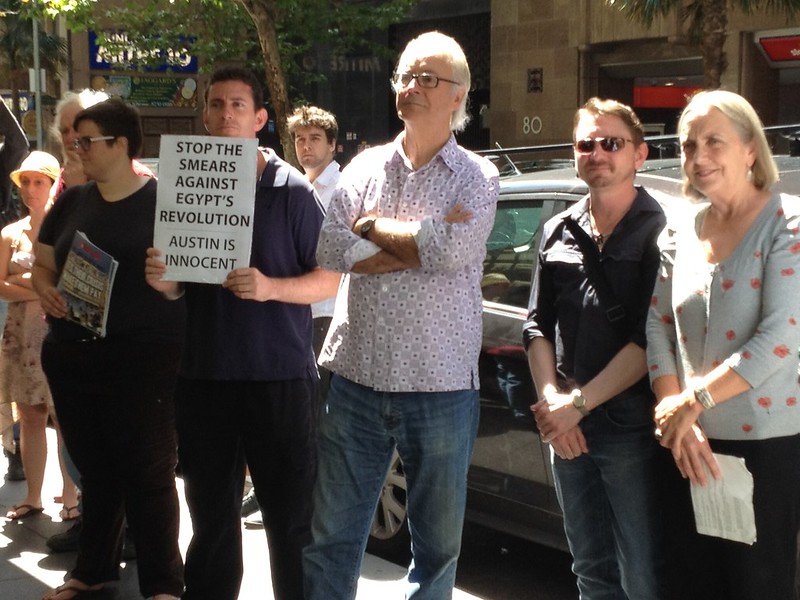 Senator RHIANNON (New South Wales) (16:20): I seek leave to amend general business notice of motion No. 709 standing in my name for today in the terms circulated in the chamber.

Senator RHIANNON: I move the motion as amended:

(i) Australian journalist, Austin Mackell, his translator Ailya Alwi, post-graduate student Derek Ludovici and taxi driver Zakaria Ahmad were arrested in Mahalla al-Kubra, Egypt, on 11 February 2012, where he was due to interview labour organiser Kamal Elfayoumi,

(ii) while Mr Mackell has been released he is still under investigation for allegedly instigating vandalism, causing unrest and providing funds to demonstrators,

(iii) the Australian Embassy in Cairo is pressing Egyptian authorities to ascertain the legal status of Mr Mackell, including travel limitations while the investigation continues, and

(iv) a free and independent media will play a critical role in the development of a democratic Egypt; and

(b) calls on the Minister for Foreign Affairs, Senator Bob Carr, to urge the Egyptian authorities to diligently pursue their investigations in a timely manner and to ensure that fair and due process is accorded Mr Mackell in any legal proceedings, should charges be laid, and that all travel restrictions are lifted.

The DEPUTY PRESIDENT: Leave is granted for two minutes.

Senator RHIANNON: Austin Mackell is a young Australian freelance journalist who moved to Egypt in February last year. His writings have been featured in respected media outlets across the world, including the Guardian, Al-Akhbar, Crikey and newmatilda.

On 11 February, when Mr Mackell sought to interview Kamal el-Fayoumi, a well-known trade unionist and labour activist, he and his party were attacked by a small group. Mr Mackell and his colleagues were instructed by a police officer to come to a police station for their own protection. Over the next 56 hours they were held in custody. They were all repeatedly interrogated. During this time they were allowed minimal communication with the outside world. Some Egyptian activists—such as Shahira Abouelleil, Kareem el-Behairy and Omar Kamel—followed the detainees, tweeted their location to the outside world and brought in lawyers to help them. The four detainees are being investigated for crimes involving inciting people to vandalise public property and government buildings. Specifically it is alleged that they promised children money if they threw rocks.

The crimes for which Mr Mackell is being investigated are similar in kind to charges against others who have reported about human and civil rights abuses. Since their release they have faced various threats and harassment. Mr Mackell is concerned that personal information that has been taken from his computer will be copied, possibly compromising his work as a journalist and placing his sources at risk. Mr Mackell has reported suppression of protesters by the Supreme Council of the Armed Forces, which currently rules Egypt. Mr Mackell is an Australian citizen who urgently needs our help.