Could you live on US$6 an hour? I’ve just read Barbara Ehrenreich's “Nickel and Dimed”. This book documents the author's experience in a range of service jobs – waiting on tables, scrubbing floors, stacking shop shelves – and finding affordable accommodation.

”Dimed” opens the window on the struggle to live that is the daily grind for millions of working poor in the US.

This book has sold two million copies. I was left wondering if anyone has done a similar study in Australia? If you know of anything similar I would appreciate hearing from you.

If you have a comfortable lifestyle have you considered the people whose work provides the services and daily needs that make your life more pleasant?

Does your wealth blind you to the life of the poorly paid - the work they do, where they live, how they survive when there is not enough money for regular meals, and how their hardship is what makes life for those with money easier and usually happier?

“Dimed” author Ehrenreich write about “the blindness of the affluent … (who) are less and less likely to share space and services with the poor.” 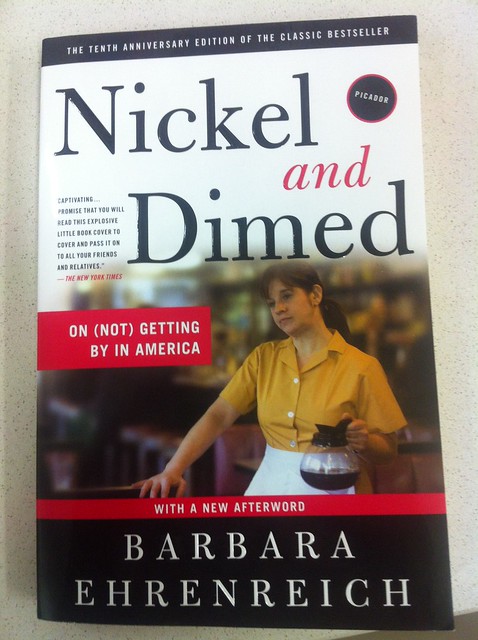 If you wonder why the poorly pay tolerate their harsh life consider their reality: “Low wage workers … dwell in a place that is neither free nor in any way democratic.” Ehrenreich writes that what offended her most during her months working in a range of low paid service jobs was “the extent … one is required to surrender one’s basic civil rights and – what boils down to the same thing – self respect”.

At the Wal-Mart training day Ehrenreich and other workers about to start with the world’s largest private employer are told they can not work any facial jewellery and they can only wear blue jeans on Fridays, and if they do they pay US$1 for the privilege.

In the US it is legal for a boss to search their worker’s purse or wallet if it is in the workplace. There are rules against “gossip”, which limits discussing workplace problems with one’s colleagues. The US equivalent of our ACTU, the AFL-CIO, estimates that each year ten thousand workers are fired. While it is illegal to fire workers for union activity it is widely recognised that people sacked for some minor mistake are pushed out because they showed some interest in union actions.

After more than two years living the low-wage life Ehrenreich writes about workplace authoritarianism: “My guess is that the indignities imposed on so many low-wage workers – the drug tests, the constant surveillance, being ‘reamed out’ by mangers – are part of what keeps wages low. If you’re made to feel unworthy enough, you may come to think that what you’re paid is what you are actually worth.”

A trend in the US is that employers resist raising wages by offering a range of extras – free meals, subsidised transport, store discounts. This works for the boss in any market downturn. A US employer explained that extras “can be shed more easily” than wage increases.

The jobs that Ehrenreich worked do not deliver the ticket out of poverty that those who back welfare reform argue.

“Nickel and Dimed” puts out the challenge of what we are doing to end the divided, exploitative society we live in.