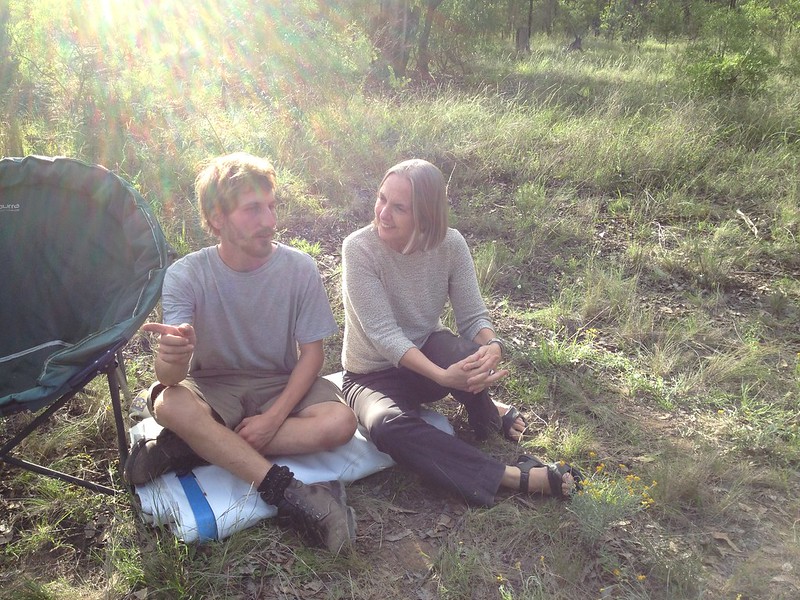 With two weeks of parliament coming up I was very much looking forward to a weekend camping trip. My destination was Leards State Forest - beautiful remnant woodland that once covered the Liverpool Plains.

It was a great weekend but the reach of the coal industry was always present. Piles of overburden tower over the landscape. The grind and revving of the coal haulage trucks can be heard well away from the deep scars of the open cut operations.

The Leard Forest Listen Up festival attracted more than 60 people, with a busload coming from Sydney and a crew also coming from northern NSW to join local farmers and environmental activists and a great line up of bands.

Before we set off for an action at the gates to the nearby Boggabri Mine Listen Up organisers filled us in on the campaign. Under a giant banner "Stop the coalonisers" Jonathan Moylan set out the local and global environmental imperatives that are driving a growing passion to stop these coal mine expansions.

Protecting the koala is one reason. All up 34 threatened species are found in the woodland where we camped. Waking up to the penetrating noise of the coal mine operations a few hundred metres away I was reminded of the urgency of this campaign, and wondered what impact this constant disruption has on the remaining wildlife.

The mines - both the proposed and existing mines - will clear 5,000 hectares of bushland. This is massive. The equivalent of 50,000 standard house blocks - a large suburb.

And this is bad news for rural properties as well. Tonnes of dust will cover this area if the new mines and mine expansions go ahead. I have seen the dust burden from open cut coal mines in the Hunter - it is massive and the operations rarely fall within the conditions that are suppose to apply. And there is the damage to local water resources.

Jonathan and Phil Laird filled us in on where the community campaign to stop this mega-mine destruction is up to. The diversity of tactics is the great strength of this enduring campaign - from peaceful direct actions to lobbying in the heart of the big end of town. There is some inspiring activism being generated here.

The protest camp has been occupied for six months. If you are in the area drop in, or make a special visit. This is a critical campaign with a great team working to protect the endangered forest, the health of the local community and the future of our climate.

Thanks to Maules Creek Community Council and Front Line Action on Coal for a great weekend.