Yesterday I went bush walking in the Gardens of Stone. Not the national park Gardens of Stone but those equally beautiful adjacent areas of pagodas and canyons in the Ben Bullen State Forest.

I was keen for a bush walk after two weeks in Parliament House and I was also interested to learn about the threat new coal mining plans pose to this stunning landscape.

Approximately 200 kms to the north west of the Sydney CBD, the Gardens of Stone form an important natural buffer zone adjacent to the Greater Blue Mountains World Heritage Area.

The bush walk took us out along one spur of pagodas. The shapes the ironstone and sandstone have been weathered into delights that intrigue me. We still do not fully understand the geological forces that have delivered such beauty.

We clambered down the pagodas into a fern lined canyon that took us down to the lush valley floor. Then we came to one of the existing coalmines. The environmental damage is already extreme and I was very concerned to see that the open cut operations are within 200 metres of some of the pagoda cliff faces.

There is clearly a strong case for the Gardens of Stone National Park to be extended as it is currently an incomplete park. The potential for open cut coal mining in the Gardens of Stone state forests areas would certainly undermine the integrity of the Greater Blue Mountains World Heritage Area.

The people I went walking with - Yuri Bolotin, Brian Fox and Richard Stiles - and many other members of the Colong Foundation, the Blue Mountains Conservation Society and the Colo Committee are doing a fantastic job to win protection for this unique landscape. They are working for a new state conservation area over adjacent plateaus and escarpments 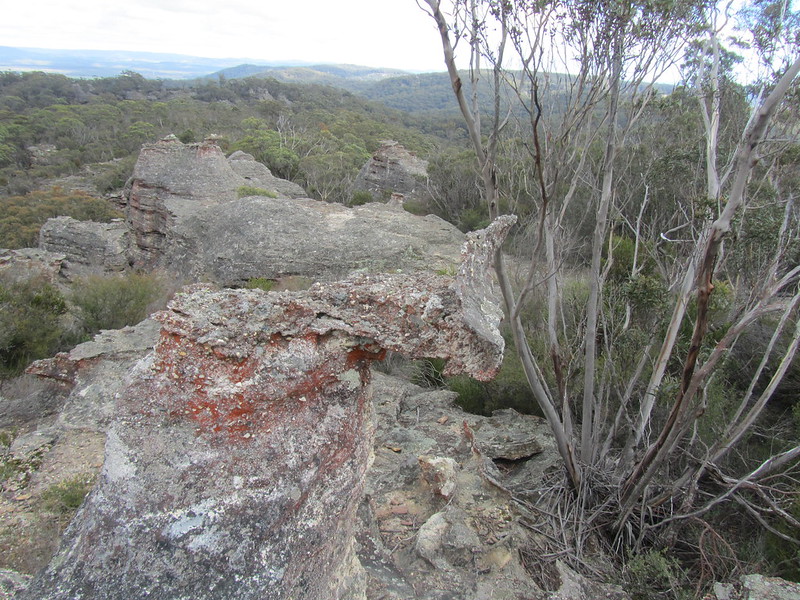 This proposed stage 2 of the Park extends over the sandstone landscapes of the Newnes Plateau and the broken stone country west of the Plateau and in the Capertee Valley. These unprotected areas are just as valuable as the existing park, and are rich in special environments such as pagodas and canyons, nationally endangered high altitude shrub swamps and an unusual heathland on Genowlan Mountain.

Plans for stage 2 were going quite well until an extension open cut development application from Coalpac Pty Ltd emerged.  Coalpac Pty Ltd has proposed a ‘consolidation' project which seeks to extend open-cut and highwall mining into a large area of the publicly-owned Ben Bullen State Forest, NSW, which is the western gateway to the Gardens of Stone. The proposed 1,088 hectare open-cut coal mine would endanger the Gardens of Stone, threatening to turn scenic public forests into piles of waste rock.

Further open cut mines are awaiting submission at Pine Dale mine (Enhance Place Pty Ltd) and Neubeck's Creek (Centennial Pty Ltd). These mines, if approved, will effectivley mark a new and significant extension of open cut coal mining into the upper Cox's River catchment - a main supplier of Sydney's drinking water. It would be the beginning of another Hunter Valley style environmental disaster.

The health of locals would also be likely further impacted if the Coalpac open cut coalmine went ahead. The dust and noise would be unacceptable. The locals are already worried. About half the town of 220 turned out for a public meeting to discuss problems with the Coalpac plan.

Coal mining companies in this area have a very poor track record in abiding by the conditions under which they operate that should provide some limits on the noise and air pollution.

Already, coal mining is degrading the Gardens of Stone as environmental management by mining companies and government agencies is largely ineffective.

This is an absolutely spectacular place and I recommend bushwalking in this area. The combination of remarkable floral diversity and exceptional rock formations make the Gardens of Stone a distinctive natural landscape. And one that plays a very important role as a headwater catchment area for surrounding settlements and the vast adjoining Wollemi Wilderness to the east.

Open cut coal mining in the Gardens of Stone should be deemed unacceptable and none of the open cut expansion plans by th various mining companies should be allowed to proceed.  This beautiful area and the headwaters of Sydney’s drinking water catchment need to be protected from mining.