Imagine you are a bird and you weigh about 30 grams. Every year as the days start to shorten over your home in the Arctic Circle, you eat so much your weight nearly doubles. Then the urge kicks in to fly and fly and you head south. The fatty reserves stand you in good stead for your incredible flight to Australia. But when you arrive off the east coast and swing across the Hunter River you can’t find your second home. It is now a coal terminal.

For Red-necked Stints and other species this is a real story.

There are three giant coal terminals at the mouth of the Hunter River. The construction of these sites would have destroyed significant bird habitat. Now the coal industry wants to build a fourth coal loader, known as T4. More than 200 species of birds either live in or migrate through the Hunter estuaries.

Yesterday I flew by helicopter over the proposed site with Hunter Bird Observers Club president and ecologist Mick Roderick. It was a very informative trip, but I found it disturbing to contemplate the massive environmental damage that would occur if the fourth coal terminal was built. 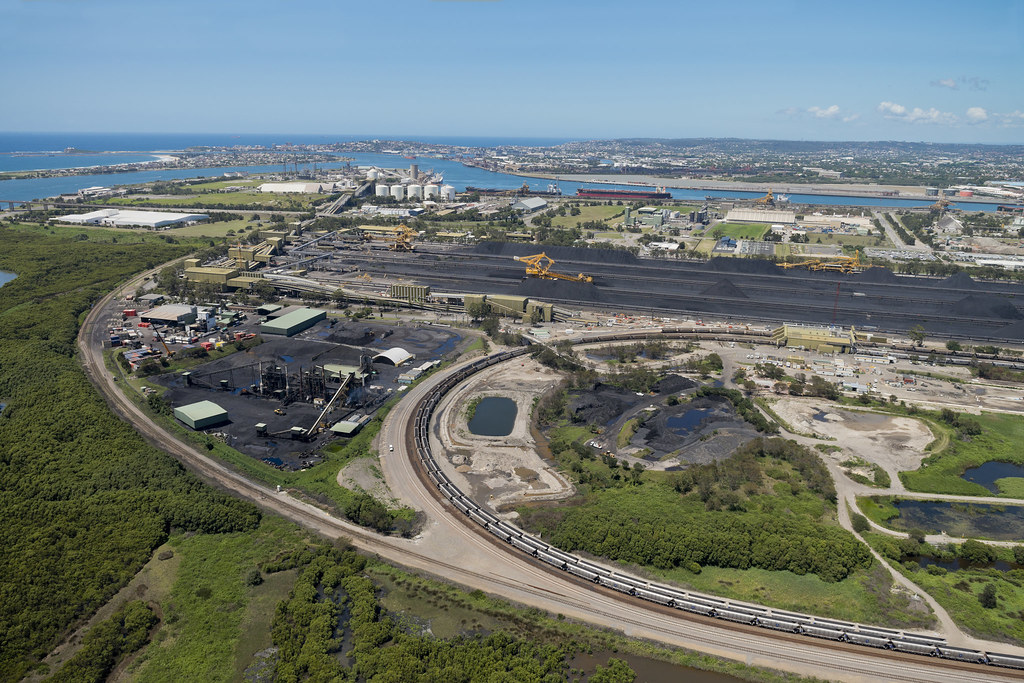 On the north and west side of the existing coal terminals there is extensive habitat. This is the second home of the tiny shore bird, the Red-necked stint, that makes the annual trek I described above.

Hundreds of thousands of birds migrate to Australia and many head for the Hunter Estuary Wetlands, located just a few kilometres from the heart of Newcastle. Significant areas are listed under the international treaty known as the Ramsar Convention, and Birdlife International has designated it an IBA - Important Bird Area. The Hunter Estuary is widely recognised as being the most important migratory shorebird site in NSW.

The area earmarked for T4 was not included when the Ramsar listing was made, but this was for political reasons only and it remains significant bird habitat that well and truly meets the criteria necessary for Ramsar-listing. Furthermore, the Australian government has contractual obligations with China, Japan and Korea to protect migratory shorebirds and their habitat.

The Labor government also needs to comply with the Bonn Convention for the protection of migratory wild animals and its own Environmental Protection and Biodiversity Conservation Act.

The loss of more feeding and nesting sites (for resident shorebirds) in the Hunter Estuary will hasten the already alarming decrease in the number of shore and wading birds in this area.

In the 1970s it was estimated 10,000 birds migrated here each year. That number is now down to 3,000 and if this downward trend continues it is estimated that by 2025 there will be virtually no birds migrating to this region and many species will be locally extinct (in the most important habitat in the state).

Our helicopter ride allowed us to closely inspect Swan Pond and Deep Pond, where bird habitat will be destroyed if T4 is built. This area is an Important Bird Area because the swamps and estuary support the endangered Australasian Bittern and over one per cent of the world populations of Chestnut Teal, Straw-necked Ibis, Red-necked Avocet, Eastern Curlew, Sharp-tailed Sandpiper and sometimes Latham's Snipe.

Another important asset that Deep Pond provides is as a drought refuge for waterfowl. Because it is the only fresh water swamp in the estuary, it is used by a different suite of bird species to those that use the tidal areas. This is the case because it rarely dries out and so provides a reliable area of habitat that is used by birds that are often associated with inland habitats, such as the Pink-eared Duck and the threatened Freckled and Blue-billed Ducks.

T4 was referred to the Federal Department of the Environment in June 2011 and Minister Tony Burke's office was originally expecting to make a decision this month. This decision is now delayed while the NSW government’s Planning Assessment Commission finalise their consideration.

This process is already compromised. The Hunter Bird Observers Club in their submission on T4 pointed out that information on the offset site for migratory shorebirds was not publicly available prior to the deadline for submissions. The offsets have still not been disclosed.

Offsets are a planning instrument that supposedly protects other land if a project such as T4 damages local biodiversity. They have become increasingly discredited as nothing more than a publicity stunt used by Labor and Coalition governments to approve unpopular developments.

Right now the authorities are working out how they manage this project, which is under increasing public scrutiny due to adverse climate change and local health impacts as well as the loss of biodiversity.

When the Red-necked stint flies in from a trip of more than 10,000 kilometres it has a right to find its home and feeding grounds.

Cash for coal clunkers will only prolong energy problems