Yesterday the international community that spectacularly failed to stop a massacre in Sri Lanka in 2009, woke up to yet more distressing news about the ongoing brutal persecution of the Tamil community:

“The Sri Lankan security forces have committed untold numbers of rapes of Tamil men and women in custody,” said Brad Adams, Asia director at Human Rights Watch. “These are not just wartime atrocities but continue to the present, putting every Tamil man and woman arrested for suspected LTTE involvement at serious risk.”

These details revealed in a new Human Rights Watch report are heartbreaking, but not surprising.

They echo what the Tamil Diaspora has been in anguish about for the past 4 painful years.

In May 2009, Britain's Channel 4 reported on sexual abuse and disappearance of the Tamils in detention. In 2010 a local media outlet, Tamilnet, reported that the Sri Lankan army was sexually abusing resettled Tamil women. In 2012 Tamilnet reported that sexual abuses was committed at two stages on ex-LTTE cadres, first in the internment camps and then after their ‘release’ from the camps.

My office has had contact with a Tamil woman who was held for months with other Tamil women and gang raped repeatedly by Sri Lankan officials.  Some of the imprisoned women were murdered.  She barely survived.

What is important about this report from Human Rights Watch is the timing of its release – the United Nations High Commission for Human Rights is currently meeting in Geneva. Sri Lanka is on the agenda.

It comes on the back of recent pictorial evidence that shows the execution of 12-year-old Balachandran Prabakaran, the son of LTTE leader, Velupillai Prabakaran, by the Sri Lankan military.  It has been reported that further details of this execution and war crimes will be revealed in a much anticipated documentary ‘No Fire Zone’ which will be shown at the United Nations on 1 March 2013. The Government of Sri Lanka is pulling out all stops to stop this screening.

The International Crisis Group also released a damning report on the eve of this Geneva meeting: ‘Sri Lanka's Authoritarian Turn: The Need for International Action’.

Of the many important recommendations the ICG has made, this is one to the governments of India, the U.S., EU, UK, Canada, Australia, Norway, Switzerland, Japan and South Africa: Refrain from accepting the diplomatic credentials of Sri Lankan military officers against whom there are credible allegations of serious crimes.

Over the past years I have called many times for Sri Lanka’s High Commissioner to Australia,  Thisara Samarasinghe to be recalled and if not, then for our Prime Minister to expel him. I repeat this call again.

Mr Samarasinghe was a commander of the Sri Lankan navy during the last days of the war, when civilians trapped in the government designated 'no-fire zone' were shelled from the sea.

The following sentence has been taken from pg 28 of the Report of the Secretary-General’s Panel of Experts on Accountability in Sri Lanka: From as early as 6 February 2009, the SLA (Sri Lankan Army) continuously shelled within the area that became the second NFZ (No Fire Zone), from all directions, including land, air and sea.

On 17 October 2011, the media reported that the International Commission of Jurists named Mr Samarasinghe in a submission containing allegations of war crimes. This submission was sent to the Commonwealth Director of Public Prosecutions, as well as to the offices of the Prime Minister and Minister for Foreign Affairs. I confirmed this in Senate Estimates.  The charges were later dropped by the AFP who said they had evaluated information in the submission and had decided they would not investigate the allegations against Mr Samarasinghe.

This decision by the AFP is most linked to the AFP’s close working relationship with the Government of Sri Lanka to stop Tamil asylum seekers from fleeing to Australia.  And while I don’t expect there to be a change in Australia’s position in the short term, I will once again raise Mr Samarasinghe's posting with Foreign Minister Carr.

While this UNHCR meeting in Geneva is taking place, representatives from the Tamil Diaspora are meeting in London and Geneva to discuss the next steps in their international campaign for justice for the Tamil people of Sri Lanka. I commend them on their consistency and dedication. I work very closely with many in Sydney, and I know their determination knows no bounds. Their dedication is deeply impressive.

The Australian Tamil Congress in a recent (27/02) press release said the UNHCR meeting is an opportune moment for Australia to work with the US, Britain, Canada, the European Union and other countries in formulating a strong resolution to set up an international mechanism to investigate war crimes and crimes against humanity committed during and after the end of the war.

I also reiterate the Australian Greens' demand for Australia to withdraw from CHOGM, scheduled to be held in Sri Lanka this year.

Canadian Prime Minister Stephen Harper has again (27/02) indicated that he is staying strong in his resolve to not attend CHOGM unless changes occur in Sri Lanka.

UK MP David Miliband recently made the following statement: I … urge the UK and all Commonwealth members, to call for a change of venue for the 2013 Commonwealth Heads of Government Meeting, currently scheduled for Colombo, so that the principles of this institution are not undermined.

Esteemed Australian Human Rights lawyer and QC Geoffrey Robertson has also added his voice, saying he wants Australia and other commonwealth countries to boycott CHOGM to protest against the impeachment of the nation's chief justice.

I note that a British Conservative politician Robert Halfon,  has called what happened in Sri Lanka Genocide: Clearly the Tamil Tigers are no longer a threat to the Sri Lankan Government and can no longer be used as an excuse, but persecution continues. The excuse of security was used as a cover for genocide.

It is deeply embarrassing that in December last year Foreign Minister Carr not only said Australia will be attending CHOGM in Sri Lanka, he also said that Australian "…will provide Sri Lanka with the technical assistance necessary for a successful summit”.

Right now there is overwhelming credible evidence that the government of Sri Lanka committed war crimes and crimes against humanity against the Tamil people during the final stages of the 27-year long brutal civil war. It is estimated that between 40 000 and 100 000 Tamils may have been killed in those last five months. We have also learned that systematic rape and sexual violence is still being orchestrated by the Government officials, nearly 4 years after the end of the war. We have a Sri Lankan diplomat in Canberra who was a high ranking official during the final stages who is continuing to enjoy diplomatic immunity in Australia. Tomorrow 'No Fire Zone' will yet again show the world the horrific brutality that the Tamils have had to endure.

What more evidence does the Australian Government need before it is willing to acknowledge that Sri Lanka must be held accountable for its war crimes and crimes against humanity?  Australia's piercing silence on this issue must end. An independent investigation into the war crimes that took place in Sri Lanka must take place. A perfect opportunity exists with the UNCHR meeting and CHOGM ahead. 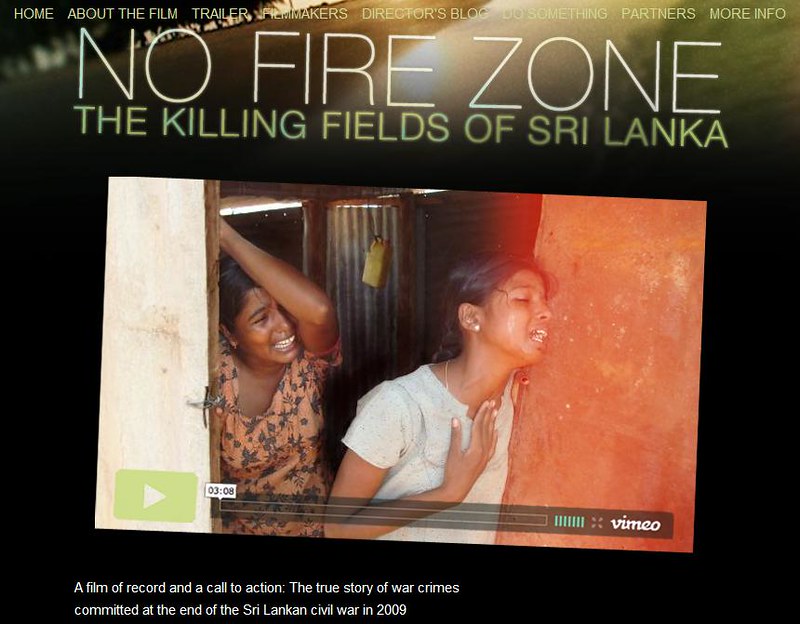